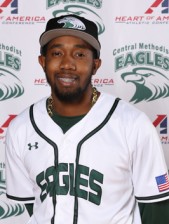 Central Methodist (46-6) defeated McPherson 17-8 and won twice against William Carey. Isaiah Davis pitched three innings against McPherson and gave up five hits, one walk, and four earned runs, while striking out three.  He has a 1-0 record with an ERA of 5.40 in 13 1/3 innings on the mound. Davis pinch ran for CMU in the two wins against William Carey.

Parkland Community College 36-17, competing at the Region 25 District Championship Tournament, defeated Vincennes, Illinois Central, and Danville, but was eliminated with two losses to John Wood. Statistics are not available for the final two games, but Zion Avery had four hits (one home run and one double), three RBIs, and two runs scored in 13 at bats in the first three games and was hitting .357 (41 for 115) with 12 home runs in 38 games.