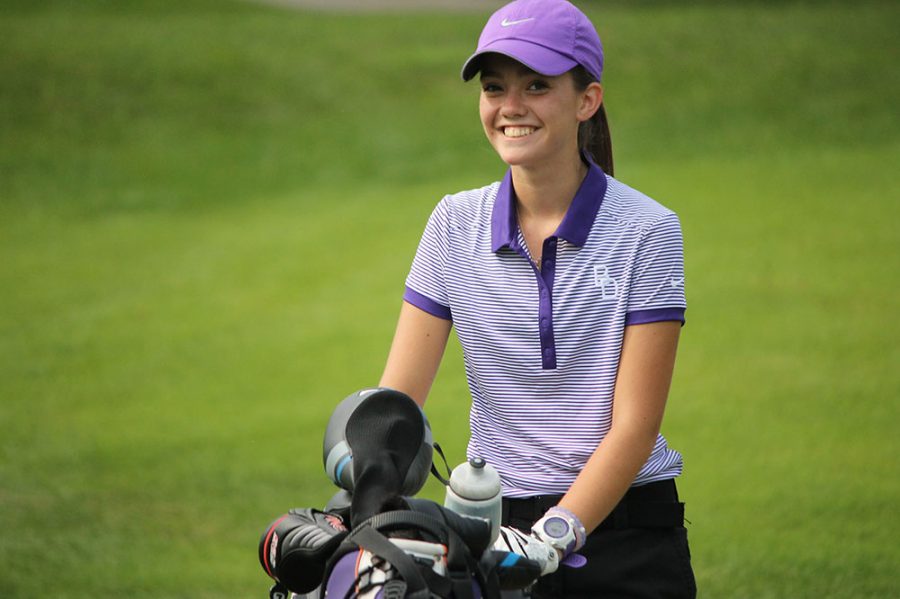 The golf season is coming close to end with sectionals starting Friday at South Grove. The Giants finished the regular season with a 167-198 win over Avon to finish the season with a 11-5 record. Sophomore Keely Jones was medalist with a 39. She is the fourth Giant to finish as a medalist this season.

Overall, the team has been able to have some success throughout the season with wins over Southport and Warren Central earlier in the season. Towards the end of the schedule, the lady Giants had a tough time against state powers Perry Meridian and Westfield, as they were more efficient on the course compared to us.

Junior Adrienne Pemberton is the perfect example of a student-athlete. Not only is she successful in the classroom — she is a Top 30 student in the junior class — but she has worked herself into being one of the top junior golfers in central Indiana.
Being able to excel in both of those key components makes her unique to her surroundings. This season has tremendously impacted her future as Pemberton showed growth in comparison to past years. She has had a few performances that presented her mentality of greatness. Her average per 9 hole score is a 43 and her average per 18 hole score is a 87 as she leads in those categories for the lady golf team. Pemberton also excels in school through hard work as she has a 4.3 GPA, and has straight A’s.

Everything has gone to plan for Pemberton as she looks towards the future. She plans on playing golf in college but is not to sure on where that will be at. For now, Pemberton is mostly focused on keeping her grades where they need to be while also getting better on the course.

“I definitely want to play golf in college, but I haven’t really started looking yet. Overall I believe that it has been very successful, i have improved a ton over the years. There are definitely times when I play awful, but now it’s much less often and I play much better,” Pemberton said.

The coaching staff includes Dave Patz and Bobby Chin as they have quite enough knowledge about the game of golf. Patz has been in the girls program for 17 years and took over the program in 1998.

After taking over the girls program, Patz revamped the system to then lead the girls on a expedition to success. During his 17 year career at Ben Davis, the girls golf team has had 14 winning seasons, made it to the regionals 15 times, and qualified for the state finals four years.

As for Chin, this is his fifth year as the assistant coach for the girls team but he is also the head coach for the boys. This coaching duo has been able to illustrate their wisdom onto Pemberton through having a connection with her on and off the course.

Patz and Chin have been a huge help in her extensive progress. Putting her into a system that helps her and the team is how they have perfected the way they create student-athletes. Pemberton also feels like her teachers, friends, and family have done a well job supporting her. We hope Adrienne Pemberton is well prepared for the Sectionals as this would be a great opportunity for her to display her true talent and hard work.

“My coach Dave Patz has been a huge help. He’s our head coach and is awesome. He pushes the whole team to be better and is a great coach. Ben Davis has helped me better myself in every way,” Pemberton said, “The teacher’s have helped me tremendously and I have made a ton of friends.”