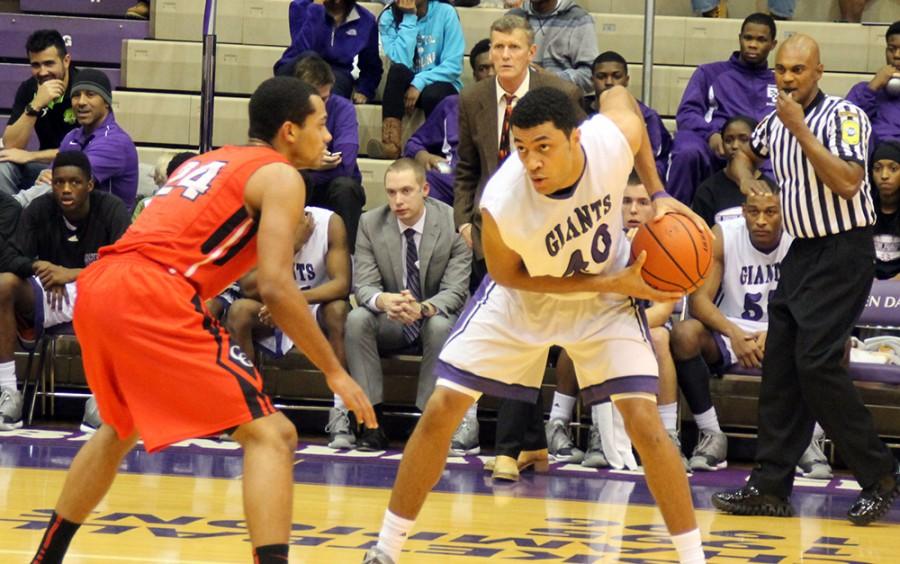 Senior Brennan Gillis looks for open space during a game against Center Gove. The Giants lead the MIC at 5-0 and are rated No. 10 in this week's Class 4A state poll.

The Associated Press released their weekly top ten Indiana boys basketball teams on Tuesday. After a solid weekend of action, including a shocking Brownsburg win over Carmel on the road, the standings were a little shaken up. The top two in the state are not even from Central Indiana: Evansville Reitz (17-0) and Homestead (15-1).

That doesn’t mean central Indiana basketball isn’t competitive, though. The season is entering the final stretch and no one is backing down. Five of the teams in the top ten are from the powerful central Indiana MIC conference, including our own Giants.

The race for the MIC championship is starting to get interesting, too. Although our Giants are behind some MIC teams in the state rankings, we’re first in the MIC. A win against Center Grove on Friday protected our perfect MIC record (5-0) and kept us in first place.

This upcoming Friday may be the most critical regular season game left for the Giants. They will be traveling to Carmel for what might be the biggest MIC battle of the year. If Ben Davis wins, they will lock a share of the MIC title no matter what.

The next few weeks will be an intense battle that should hopefully give some momentum heading into sectionals. A MIC title won’t have any effect for the state tournament, but in a conference as tough as ours the championship definitely has merit.

The game at Carmel on Friday starts at 7:30 p.m, with the JV playing at 6 p.m. Come on out and support the team- and maybe witness some history. As freaky as it sounds, the Giants haven’t won the MIC title since 2002; the same drought we had previously in the football state championship.

Watching another drought ended against our rival Greyhounds? You know you have to be there.