Remembering the past, looking forward to the future 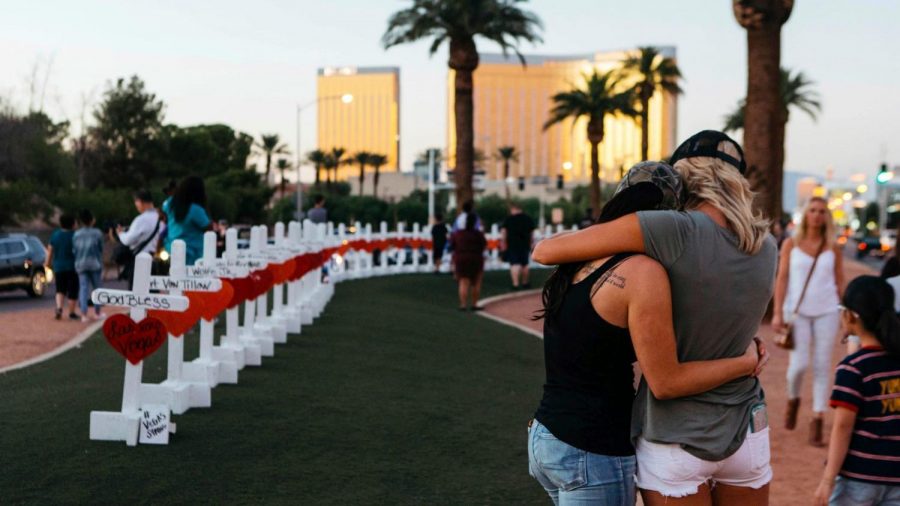 Las Vegas, Nevada has been known for years for being the party capital of the world. Drinking, gambling, clubs and even some family friendly hotels and activities make it easy to repeat and laugh about the common saying “what happens in Vegas, stays in Vegas”. However, Sunday evening we learned that sometimes what happens in Vegas doesn’t just stay in Vegas.

A shooter, located at a hotel room on the 32nd floor, fired down bullets from a modified semi-automatic rifle. Numbers are still rising, but currently 59 people are reported dead with 527 reported injured. First responders and citizens of Las Vegas have all worked together to save as many lives as possible and relieve the high stress that is still in the community. Thousands of people from across the world have donated blood. City hall in Las Vegas has been used to hold vigils nearly every hour of the day for the lives lost.

August of 2016, BD Spotlight released an article in our monthly newspaper concerning the Pulse Nightclub shooting in Orlando, Florida. This was the previous record holder for the deadliest mass shooting in American history until the recent event in Las Vegas, with a death toll of 49. Nicole Thomas, previous co-editor in chief of the Ben Davis Spotlight, now freshman at Ball State wrote about the controversy of gun control.

“There are some who won’t discuss the issues of gun control and violence because it’s too much of a controversial topic.. These are numbers that should not be ignored.. We often want it both ways: ban guns, but don’t leave our country defenseless. Stop gun violence, but don’t control the use of guns,” Thomas said.

Even our student body is split when it comes to gun policy. At the first Ben Davis Political Action Club after the Vegas shooting, the students present debated about the implication and need for further measure of gun control.

Students who don’t support further measures of gun control argued that it won’t solve the violence problems in the United States while others said that it will harm minorities by keeping weapons in the hands of oppressors.

Students who do support reformed and heightened gun control said that it would reduce murder rates by taking away the destructive devices and it would be a necessary precaution that has proved to work in other countries.

The solutions to gun violence that were suggested included more mental health, teaching society to reduce male gender stereotypes to lessen violence, and the reduction or complete loss of guns for the public and police force. The topic has been briefly spoken about in past BDPAC meetings but not as much as it was this time.

It isn’t true that gun violence is impossible to solve. In many other developed countries where there is large bans on guns, even for the police, murder rates caused by guns are lowered. Even though other weapon related deaths are higher in those countries than in the United States, the combined murders per capita is lower.

For them, having the right to bear arms was essentially to allow them to be a part of a militia in case of future problems with political leaders. The guns that were around during this time were also far technologically from what we have now. They took minutes to load and shoot. Even small handguns can be more destructive than those historic guns, let alone semi and fully automatic rifles.

People also argue that the Las Vegas killer used a fully automatic assault rifle, an illegal gun in the United States. This would support certain people’s belief that banning a weapon wouldn’t prevent it from being exchanged in our country. However, it’s been confirmed that the shooter actually used semi-automatic weapons, including an AR-15, which is extremely similar to the semi-auto that was used in the Orlando shooting last year.

These weapons were illegally modded to allow for rapid fire of the gun, essentially turning it into a full automatic weapon. Because of the ability to modify these guns to be more dangerous, it nearly renders the entire banning of full automatics ineffective.

It’s true that without these guns, violence would still occur often and on large scales. However, it’s simply unnecessary for the public to be in contact with weapons like this. Pistols and other common household guns for “safety” also end up causing more trouble than what they were supposed to protect. Nearly 6,000 kids a year get injured due to firearm accidents. Nearly another 1,500 die. Having a gun in your home has even been found to increase your chance of homicide and suicide.

Our youth are getting killed and injured at alarming rates just from getting access to improperly stored guns in their own houses. School shootings are harming even more of these children. After the Sandy Hook shooting where 20 kids around six and seven years old were killed by a man who made it into their school with weapons, school awareness has increased and made intruder drills occur multiple times annually. We’re putting children’s safety in their own hands, not in the hands of gun owners and the government.

High schoolers and our surrounding communities depend on gun control to keep us safe. In the past few years, multiple gun sightings on campus have been reported and resulted in charges for the student. A beloved Ben Davis student, Juan Romero Sanchez, lost his life last November due to gun violence. The school continues to mourn his death that came way too soon. Another Ben Davis student, Rondell Allen, a defensive back for the football team, was hospitalized after a drive-by shooting.

We must work harder to make more dangerous weapons illegal and raise awareness about the horrors that guns in houses can cause. There is no reason for 3% of America’s population to hold half of the country’s guns. Each of these 3% has an average of 17 guns, totalling to 133 million of the country’s 265 million guns. We rank number one out of every country in the world with 112 guns per 100 citizens. Serbia, second place, only has 58 guns per 100 citizens, nearly half as many.

At this point, gun control isn’t being seen just as a right. It’s a place of entitlement for Americans to point out to say that our country is better than others, because we have the freedom to have a scary amount of guns for no reason without having to let the government track how many we have. At the very least our country needs to track how many guns each person has. There are ways for people to buy 30 guns at a gun show in one day and have no one other than them and that private seller know about it. If that doesn’t terrify you, it shows the American normalization of armed citizens has worked.

The National Rifle Association, or NRA, has worked hard for years as a nonprofit to improve the image of guns by endorsing politicians and celebrities. By now, barely a single popular figure will speak out about needing more gun control because of the money given to them by this association.

Our political system has grown corrupt due to these donations. We aren’t being told everything about gun control because it would be a negative image for the NRA, and if someone is getting millions of dollars from them, they are going to change what they would have said in order to keep the money flowing.

The United States has suffered through many events of gun violence, from Columbine, Sandy Hook, to the now present Las Vegas shooting. How we solve this problem hasn’t been able to be solved in the nearly seventy year time span since the first mass shooting in the United States in 1949 in Camden, New Jersey. There is so many obstacles preventing further measures from being taken to solve these problems.

The words Thomas wrote in the article last year still ring true. People want our country to be safer, but they don’t want to risk having more gun control in return. Hopefully next year we will have added more provisions and bans so the topic won’t have to be revisited after yet another shooting. But we must remember that this is more than just a political topic for debates to be held over. It’s a serious wave of tragedies that is spreading across the United States. If you’re for gun control or against, everyone can agree that  the pain that is caused after a shooting can last forever.