Pope Francis will find pomp and politics in Washington 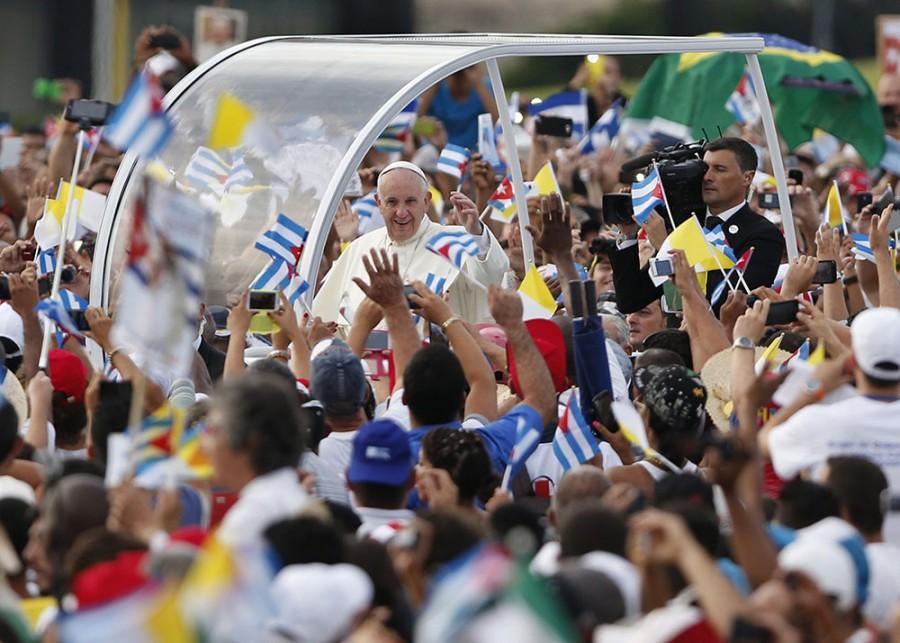 WASHINGTON – Pope Francis’ arrival in the United States this week will drive politicians and interest groups on each side of America’s political divide to claim him as one of their own.

They may well discover that nobody puts the pontiff in a political corner.

“This pope is a very independent figure and we know from his previous travels that we don’t know what he’s going to say until he says it,” said Charles Kupchan, senior director for European Affairs at the White House National Security Council. “In that respect, we are fully expecting that there are some messages with which we may respectfully disagree or have differences.”

The Roman Catholic leader arrives at a particularly political moment, when issues of concern to the church cut through policy debates in American politics, including abortion, the climate, immigration into the U.S., refugees pouring out of Syria and a nuclear deal with Iran, a pact that the Vatican welcomes. His views defy conventional political labeling and appeal to or put off each side depending on the issue.

At first at least, Washington’s political problems will give way to pomp and ceremony at the White House and on Capitol Hill for the popular pope.

President Barack Obama is so excited about his visit that he’s personally greeting the leader of the world’s 1.2 billion Roman Catholics at Joint Base Andrews on Tuesday, a departure from the usual protocol.

Wednesday, Obama hosts a greeting ceremony for Francis on the White House’s South Lawn before nearly 15,000 guests. The 78-year-old pontiff will then participate in a parade around the National Mall before holding a canonization Mass for missionary priest Junipero Serra at the Basilica of the National Shrine of the Immaculate Conception.

Thursday, Francis will become the first pope to address a joint session of Congress.

The moment punctuates the change in America since presidential candidate John F. Kennedy in 1960 had to deliver a speech in Houston to ease suspicions _ and prejudices _ that a Catholic president would be beholden to the Vatican.
Now, Francis will look out on a Congress that’s 30 percent Catholic, where the House Republican and Democratic leaders _ John Boehner, R-Ohio, and Nancy Pelosi, D-Calif. _ and the president of the Senate, Vice President Joe Biden, are all Catholic.

Cardinal Donald Wuerl, the archbishop of Washington, and Vatican officials said Francis likely will talk to lawmakers about his core issues _ climate change, poverty, immigration and inequality _ “in a spiritual dimension.”

Samantha Power, the U.S. ambassador to the United Nations, said “there’s a nice convergence of the timing” of Francis’ trip and issues the Obama administration is currently grappling with.

In June, the pope issued an encyclical that calls climate change “a global problem with grave implications.” Obama is striving to get international agreement to combat global warming ahead of a United Nations conference on climate change.

The administration is weighing what to do about a Syrian refugee crisis _ Obama has promised to take in 10,000 in the next fiscal year. The Vatican said the pope will address the international refugee problem when he speaks Friday at the United Nations.

“On many of the big-ticket items _ like climate change, like fighting inequality, like poverty, like reaching out to people in distress and people in need _ his essential message will resonate very much with the president’s agenda,” Kupchan said. “And in that respect, we are hoping his moral authority will help us advance many of the items that we take to be very high on our policy agenda.”

Still, White House officials insist they’re not seeking to politically capitalize on the pope’s visit. And John Carr, director of Georgetown University’s Initiative on Catholic Social Thought and Public Life, said it would be foolhardy to try.

“He doesn’t fit the Washington categories, right, left, liberal, conservative,” said Carr. “Anyone who tries to use the pope for their own political purposes will fail. The power of the pope’s presence is moral, not political.”

Some abortion opponents on and off Capitol Hill are hoping Francis will use that moral authority to forcefully speak out against the procedure during his U.S. tour.

Like Kupchan, Republican leaders say they’re aware of Pope Francis’ independent nature, especially after the Vatican helped facilitate talks toward normalized relations between the United States and Cuba, a move that put Francis at odds with congressional Republican leaders and presidential candidates.

Francis’ comments about capitalist excess _ he called the “unfettered pursuit of money” the “dung of the devil” in a speech in Bolivia in July _ have also raised eyebrows in conservative corners of Washington and on Wall Street, and prompted questions about whether Latin America’s first pope fully understands the U.S. financial system.

“He is positively inclined towards the United States and those who live there, while disagreeing with the savage capitalism which some in the country engage in,” said the Rev. Juan Carlos Scannone, a professor emeritus of philosophy at Colegio Maximo, a Jesuit college near Buenos Aires, Argentina, who taught the pope as a young man.

“He is in favor, I believe, of the free market economy but against the hegemony of greed and capital over workers. (Pope) John Paul II had already said this as well in regards to the free market economy _ that it is important to make sure that pursuing profit doesn’t blind people to the exploitation of workers and the exclusion of the poor.”

Francis is popular in the United States. But his popularity among conservatives appears to have taken a hit, dropping from 72 percent to 45 percent over the last year, according to Gallup. Several political experts attributed the slide to the pope’s stand on climate change and the Vatican’s role in the U.S.-Cuba talks.

Overall, Francis’ popularity dropped from 76 percent in February to 59 percent in July, returning him to almost the same approval rating as when he was named pope in April 2013.

“I see the pope on questions on the doctrine on the Catholic church as the ultimate word,” said Rep. Mario Diaz-Balart, R-Fla., a devout Catholic. “His opinion on foreign policy, environmental policy, he has the right to have them, but his word is no more greater, no more important, carries no more weight than anybody else. I will not make my foreign policy or domestic policy or economic policy decisions based on the pope’s opinion.”

“When the pope chooses to act and talk like a leftist politician, then he can expect to be treated like one,” Gosar, a Catholic, wrote in an op-ed for Townhall.com, a conservative website. “If the Pope wants to devote his life to fighting climate change then he can do so in his personal time. But to promote questionable science as Catholic dogma is ridiculous.”

“There’s one thing about this pope,” said the speaker, who invited Francis to come to Congress. “He’s not afraid to take on the status quo. He’s not afraid to say what he really thinks. I can tell you this, I’m not about to get myself into an argument with the pope.”