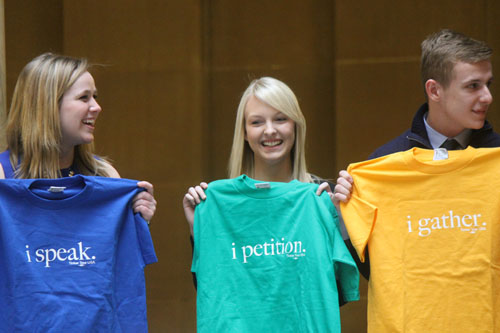 Ben Davis senior Ashley Shuler poses with a shirt given to her my Mary Beth Tinker during Wednesday's First Amendment Symposium.

The symposium celebrates the first amendment and honors the state’s top high school journalists. Mary Beth Tinker of the famed Tinker vs. Des Moines free speech case from the 1960s was the guest speaker.

“It is a privilege to see so many top journalism students celebrating the First Amendment,” Tinker said. “This is a refreshing event.”

Tinker was suspended from middle school as a 13-year-old when she wore a black arm band to school to protest the Vietnam War. Her case went all the way to the Supreme Court before the court ruled in her favor and in favor of free speech. It was landmark case of the 1960s.

Shuler gave a speech on the right to petition our government and was one of five student journalists to give a speech. Shuler is the third Ben Davis journalist in the past four years to be a finalist for state journalist of the year. Hannah Ishikawa and Lauren Chapman were finalists in 2011.