Who is that girl?

“Since I became a teacher seven years ago, I’ve noticed that young women are usually enemies when there really isn’t a need for it,” Hogue said, “I also saw that girls really wanted support, guidance and advice about what’s going on in their lives.  So I wanted to create a club where we could do just that.  It’s all women so we are able to feel comfortable expressing themselves.”

Miss Giants is a sisterhood that empowers, educates and encourages other women.

“We want to promote greatness and success in high school and beyond,” Hogue said.

Hogue had a club like this at her previous school called “Warrior Women” and this will be her second year leading her own club.

All on her own Hogue has gotten Miss Giants running.

“I mentioned it in all of my classes. I also handed out flyers to the foreign language department and had a few announcements,” Hogue said, “It was not difficult for me at all to get it started. It’s actually quite fun because many girls already have strong feelings about being a strong woman, so it’s not hard to recruit girls.”

Her dedication and passion has inspired many students already. Having a club like this is certainly needed and what better way than to have a strong woman at the head of it all.

“I am super excited about this group,” Hogue said, ”I just want to inspire the girls to become more than what they think is possible for them. I also want to include men at some meetings. I really would like for all people to want the same thing which is equality.”

Miss Giants meets every other Wednesday after school. The next meet times are 10/28, 11/11, 11/18, 12/2, 12/9. Hogue is a great example of what every teacher should be like. She is using her voice as an opportunity to help others get theirs out there.

Ladies, join her club today and be reminded of the positivity and strength women have. 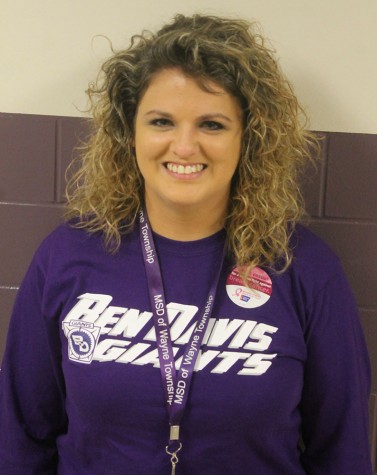