Brickler, Haynes entertain with a little help from friends 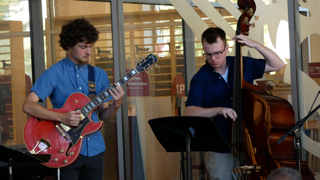 Guitarist Carter Brickler said, “It was very nerve wracking because this was my first public performance ever and obviously I wanted it to be good. But it was also a very fun and exciting experience.”

After meeting at Butler’s jazz summer camp, they formed the group this year. “We met a couple other musicians there that we enjoyed hanging with and I feel we had great chemistry with when playing”, bassist Zach Haynes said.

Members include trombonist Ethan McKinney and percussionist Eddie Meadows from Herron and Carmel, as well as Ben Davis’ very own Carter Brickler and Zach Haynes. In addition to playing the guitar, Carter is also the first viola in the Ben Davis symphony. Haynes is also first bass.

They typically meet on Saturdays, but of course busy schedules can get in the way. The group is entirely student-led, so they run their own practices with little facilitation from mentors that really only help to schedule gigs.

This is different from school groups, Haynes says, because “no one person is in charge, it’s a space where we can all experiment and find out together what’s best for our performances”. This gives them the freedom to focus their practices on running their songs and figure out how to stylize them.

They would like to share jazz with more people, and hope that more people can appreciate the genre as much as they do. “Jazz has got to be my favorite not only because I enjoy playing it but also pretty much every modern music genre we all love and listen to is routed in jazz and might not exist if jazz never came to be,” Haynes said.

While they don’t know when their next performance will be, you can catch Haynes and Brickler at the Ben Davis jazz band concert on September 25 in the theater at 7 p.m.

Their full performance can be found here: https://www.youtube.com/watch?v=0KFxDqfhFek