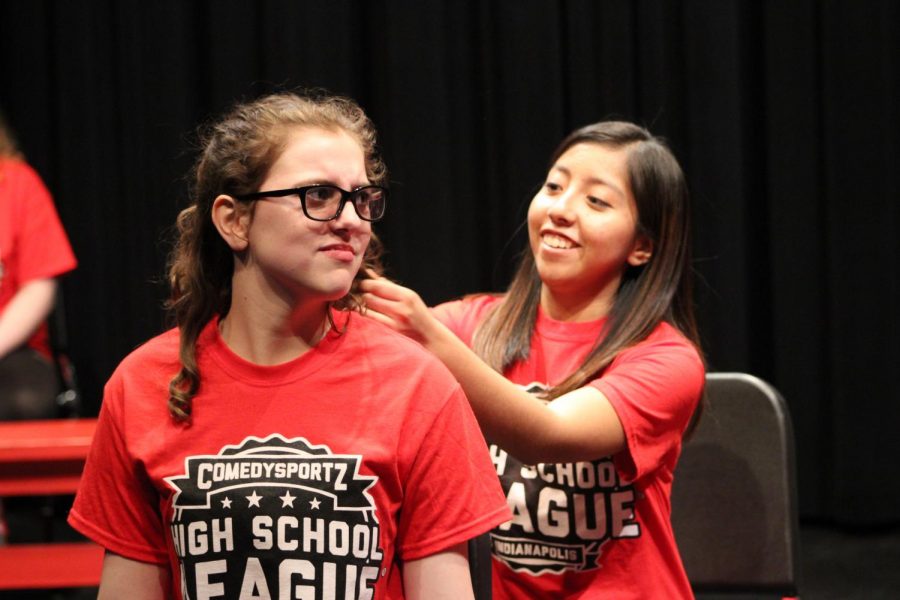 ComedySportz is competitive improv, where two teams from different schools compete against each other for a trophy. Performing arts teacher Ben Fraley is bringing ComedySportz to the stage tonight at Ben Davis.

Our Giants will face Center Grove is our first home meet of the season tonight at 6 p.m. in the theatre. The team has had two meets at Decatur Central to start the year.

As the name suggests, the entire show is based on comedy. Think of the show Who’s Line Is It Anyway? and you have a good idea of a ComedySportz performance.

“At practices they work on telling a good story and making sure our characters know each other,” Fraley said.

Participants work in practice with each other to learn the scenes and to heighten the situation. They work on understanding the joke all together. The teams are small so that way it’s easy for everyone to get to know each  other and so that they pick up each other’s vibes.

At meets, teams compete against each other and a referee has fun with the audience and helps encourage audience reactions. At Decatur Central last week, the referee took time at the beginning to explain how the whole thing works, which is great for first-timers in the crowd.

The team captains chose a game and at the end of each of their turns the audience chooses which one by how loud they cheer for that team. There’s also two fouls that can be issued during the game — a groaner foul and a brown bag.

Once the fouls are explained, the games begin.

Decatur chose the first game of the night, which was “Back to Whenever.” Here you start with a scene and a random moments the ref will call “Back to _” which then the players will act that out.

Ben Davis had some marvelous and comedic moments. For example, in a game called Grand Theft Auto, they had to “steal” a car away from the opposing team as something that started with someone’s initials from the audience. So as Biscuits and Gravy, Hailey Dewitt goes, “ I don’t mean to toot my own horn, but I think I’m delicious.”

The whole show was entertaining and full of energy. Today’s show begins at 6 p.m. with $5 admission for adults and $3 for students.